The Man Who Speaks on Behalf of ALL Children
October 17, 2019
The First CAR T Patient Story Revisited 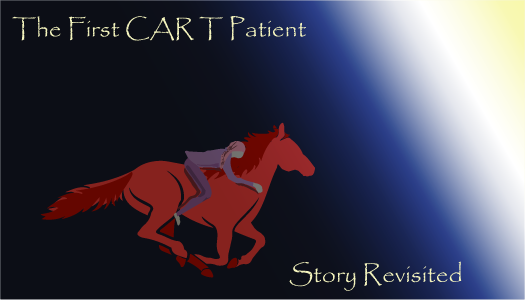 The only child’s cancer diagnosis, remission and then relapse, oncology ward, remission again, lost cure, relapse again, hospice recommendations, coma, long coma – these were 2 years in the life of Tom Whitehead seven years ago. Tom is the father of the first child who received CAR T cell therapy for relapsed/refractory acute lymphoblastic leukemia (r/r ALL).

On October 4, 2019, Tom captivated the audience at the ARM Cell and Gene meeting on the Mesa. He is a tall man, with quiet dignity and a warm sense of humor. He told his family’s story, from the first symptoms to cancer diagnosis to recovery to the Foundation. All of it.

Not only did I devour Tom’s talk, I also got a chance to catch Tom at lunch and hear untold stories that you are about to read. Be ready to humble up!

Not Your Playground Kind Of Bruises

Emily was five years old in May 2010, when her mom, Kari, noticed bruises all over her body, over 20 of them. Emily was in pain. Kari was scared because the bruises seem to grow and multiply at an alarming rate. She had no idea what it could be, and they rushed to a hospital.

The diagnosis was swift: it was ALL. Emily’s doctors started her on chemotherapy immediately. Emily responded to the treatment and went into remission. Life appeared to be returning to normal. To cheer Emily, Tom and Kari bought her a puppy, Lucy. They heard that having an animal in the house positively affects recovery in pediatric patients.

It was Lucy who noticed when something was most certainly wrong. One day, Lucy’s behavior changed: she stopped playing but would not leave Emily.

The next day, Emily relapsed.

Found A Transplant Donor. Not So Fast…

The family continued their formidable march through the medical system. Very soon, they started to receive advice about hospice care for Emily because her survival chances were very low. Tom did not want to believe it.

During his speech, Tom talked about his resolution to be with Emily and Kari throughout the entire process, even if it meant losing his job and financial stability. Emily was his only daughter, and he resolved to be with her.

If you meet Tom, you will instantly feel how incredibly determined this man is. He told me that several of his dreams about Emily’s disease later came true. So, he believed that Emily could recover if only they kept fighting as much as they could.

The family decided to get a second opinion at the Children’s Hospital of Philadelphia (CHOP), a nearly four-hour drive one way from their hometown.

After more treatment, Emily went into remission again. That time, doctors identified a bone marrow transplant donor. Emily’s remission provided a window of opportunity for her to receive a potentially curative transplant. However, the donor delayed a few weeks. Those few weeks were enough for Emily to relapse again and stop being eligible for the transplant. Once again, the Whitehead family was receiving hospice care recommendations.

When Tom and Kari arrived at a pediatric oncology ward, one of nurses approached them. She said that she forbade them to divorce and that they must continue dating or stay together while Emily was in treatment.

Apparently, the nurse was compelled to be so forthright with all parents because she witnessed so many children falling through the cracks and dying because of neglect. Parents would break under stress of disease, initiate divorce proceedings, while neglecting to take care of their child. For example, on a day of surgery, when legal guardians must be in the hospital making critical treatment decisions, parents would be in court, fighting for their rights to make such decisions in the first place. Ultimately, a child would die from cancer too soon, and parents would divorce and often go broke financially.

Tom would also experience more horrors first hand. He saw how unlucky some kids were in pediatric oncology wards. He observed many kids were alone – their parents did not visit much. Some children were wheeled into an operating room without parents by their side. Naturally, he and his wife felt heartbroken by this. They could not enter other kids’ rooms to provide support and care. So, they arranged for nurses to bring those lonely children to the play room to meet and play with the Whitehead family.

Not Your Average Therapy

One day, Whiteheads found out that Carl June’s CAR T trial had just opened at CHOP. Emily was the first patient to enroll into the study to receive an infusion of tisagenlecleucel (Kymriah).

The autologous CAR T product manufacturing took six or so weeks, from apheresis to infusion. All that time Emily had to stay in the hospital. During his presentation, Tom shared many pictures and descriptions of what it looked like to be in a hospital while waiting for the CAR T product to arrive. It was not for the faint of heart. Emily grew weary, and though she was a young girl, the experience was taking both physical and emotional toll. The pictures showed her sad eyes, filling with blood as the disease was crawling through her body.

Soon after the CAR T infusion, Emily slipped into a coma. Gradually, doctors were telling Tom that there was no way Emily would survive. They offered to stop the life support.

Tom refused to give up. “I’ll see you in the morning, Doc.” Tom would say to the attending physician leaving for the shift.

Eventually, Emily’s doctor decided to infuse tocilizumab (anti-IL-6R). Then, tocilizumab was not in the original study protocol, but now it is one of the requirements of CAR T care. On Day 14, on her 7th birthday, Emily woke up from the coma… and much to the doctors’ surprise, they couldn’t find any cancer cells in her blood.

Since then, Emily started celebrating her birthday differently: she takes a photo with a “years without cancer” sign. Emily has now been cancer-free for more than seven years.

There were blessings along the way, too.

Tom had been working as an engineer at FirstEnergy when Emily was diagnosed. The word got out that Tom’s daughter had aggressive cancer. Someone very creative came up with the idea to donate vacation days to Tom. Luckily, FirstEnergy accepted the idea. Soon, many FirstEnergy employees, from several states and locations, each donated a day, resulting in a total of 525 vacation days available to Tom. What a creative and humanly wonderful solution! Kudos to FirstEnergy for supporting this. And thank you to the first employee who conceived the idea and pushed it to fruition.

Putting it in perspective: when he went back to work after Emily’s recovery, he did not miss a day.

When The New York Times Learns About You

Emily’s treatment success led to an avalanche of press coverage. A crew from The New York Times came to the Whitehead house to do a photo shoot and a front-page article. Tom said that they took more than 200 pictures, with less than 10 with him. Smiling, Tom said that the NYT team wanted Mom, not Dad, in the pictures, and he was just fine with that.

The NYT coverage was just the beginning. During his talk, Tom also showed pictures of Emily with Lucy on the front page of a Chinese newspaper and in a medical textbook explaining the CAR T therapy. No family ever wants this kind of attention, but Emily definitely was pleased about one thing: her beloved dog Lucy made it into the medical textbook.

Tom said that, on the way home from CHOP, their hometown’s emergency services stopped traffic for their route home; people cheered as they drove by. Emily was finally out of oncology wards and able to resume a normal life.

But, their life changed again. They started receiving calls from families with children afflicted by cancer. The parents wanted to know where they could get the CAR T treatment. Tom realized that his family was lucky to have access to the treatment and that many families were left out.

Eventually, he decided to quit his job and started the Emily Whitehead Foundation. The foundation raises money for CAR T therapy for children and helps families bear the cost of the disease. Since establishing the foundation, Tom has travelled domestically and internationally around the world telling their story and raising awareness.

Tom said that establishing a foundation was easier than convincing Emily to talk about what she went through. Who wants to relive it? He finally persuaded her that her story could help save kids like her who have not been as lucky.

This year, with her hair half up in a pony tail and her comfortable clothes, Emily agreed to address a crowd of biotech business professionals at the ARM Cell and Gene meeting on the Mesa. Her speech was moving, an intracardiac injection of patient reality into a busy business meeting. She received standing ovations.

On his journey to raise awareness, Tom met Hollywood film producers, who are providing some financial support and publicity. More importantly, they are directing a movie about the Whitehead’s cancer fighting story and current mission. Tom said that the filmmakers hope to release the movie next year (2020), but he does not yet know which channel will end up owning the rights.

I sincerely thanked Tom for giving the speech and for helping the biotech business and scientific community to remain grounded. In the midst of day-to-day tasks and petty politics, we tend to forget that many children are waiting for life-saving treatments, while their families are becoming more and more fragile.

Go to the Emily Whitehead Foundation to learn more.

We welcome any corrections, additions, or comments from the readers.